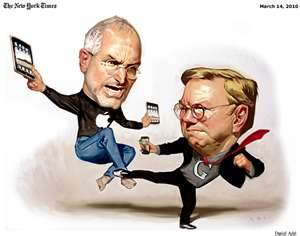 Elon Musk, the billionaire entrepreneur behind companies like PayPal, Tesla Motors, and SpaceX, has made waves across the Internet by predicting that Google Inc. (GOOG) will come out ahead of Apple Inc. (AAPL) in the tech giants’ battle for control of the smartphone market.

While speaking at a panel in London, Musk was asked which of the companies, Apple or Google, had better prospects for growing its share of the smartphone market. Musk responded that his money was on Google, largely because of the search company’s leadership and the perceived decline in leadership at Apple in the wake of Steve Jobs’ passing.

“It really makes a difference who runs the company,” Musk said of the battle between Apple and Google. “[Google CEO] Larry Page is quite good and probably in the long run will come out on top.” Page, who is one of the co-founders of Google, took over as CEO in April 2011, following the departure of longterm Google CEO Eric Schmidt.

But according to Musk, just as important as Page’s prowess, is the leadership vacuum facing Apple after Steve Jobs’ death in October of last year. Jobs was long viewed as the creative force behind Apple, and his vision for the company is widely credited with bringing Apple back from the brink in the late 1990s. “Because Steve Jobs is out of the picture,” Musk said, Apple Inc. (AAPL) is less able to compete in the rapidly evolving smartphone market.

It’s not only Musk who has called into question Apple’s ability to lead the smartphone market. Steve Wozniak, who, along with Jobs, founded Apple Computers in 1976, has expressed his doubts that Apple retains the creativity needed to compete with Microsoft, among other competitors. Wozniak said that Apple, which has for years relied upon its innovation to get an edge over competitors in the software and hardware arenas, no longer has the creative spark it once did and is likely to fall behind.

If Apple’s iPhone and mobile operating systems do fall behind Google’s Android, lack of innovation may not be the only culprit. Many Android devices are now available free of charge, when customers sign a contract with a data and phone service provider. The iPhone 5, by contrast, costs at least $199, and that’s only after agreeing to a long term contract with a company like Verizon or AT&T.

Besides of its lower price, Android packs a level of versatility the iPhone series has not matched. Whereas the iPhone is available in only a select few models, Android runs on a wide range of phones, giving customers a huge range of choice when it comes to screen size, processor speed, plug-in ports, and other phone features. Customers desiring a phone that fits a very specific need are more likely to find what they’re looking for with Android. Besides the hardware, Android also offers a more enticing space for developers, who face far fewer rules and hurdles when developing for the Android OS. The iPhone, on the other hand, has strict rules regarding which apps are permitted for download, and Apple is notorious for keeping independent developers on a short leash and rejecting apps that don’t fit its rigorous criteria.

All of these factors come into play when considering who will win the smartphone war. Apple Inc. (AAPL) is the leader now, but according to many, this will not hold true for long.