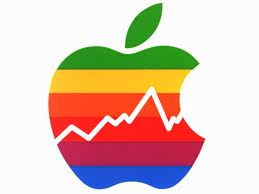 The Nasdaq stock exchange has had quite a year so far, with a massive 33 percent increase that is equal to a 1,000 point rise. In fact, the exchange topped the 4,000 mark just in time for Thanksgiving this year, and the holiday shopping season is only just begun.

The Nasdaq is powered mostly by tech stocks, which explains the big rise it has seen this year, as the tech market has expanded and grown exponentially. While the massive increase in the exchange’s overall value seems monumental – and it is – but it is so much more impressive because its number one company by value has not really pushed the numbers this year.

Apple Not Keeping Up With The Rest Of The World

Apple Inc. (NASDAQ:AAPL) is the most valuable stock in the world. However, it has fallen far behind the pack this year, and has only risen 4.5 percent. Last September saw Apple Inc. touch its high water mark of $702, followed by a subsequent slide and recovery to its current level of $556.07 per share. The stock seemed to sour in the mouths of investors almost overnight, and it shed value by more than $200 per share before finally leveling out and making a comeback.

While it has seemed that shareholders in Apple have been left with sour cider for the last few months, it is possible that some sweet nectar may be just around the corner for the Cupertino company. We recently reported that Apple is projected to hit $600 per share by January of next year, and the company is climbing towards that mark each day.

While the stock gained $10.11 per share today and rose by 1.85 percent, the fact that it is inching towards that $600 mark could be a sign that investor confidence in the company is once again growing. The company is a conundrum of sorts, with analysts having multiple predictions regarding its future. However, the company has a huge cash pile, which Carl Icahn believes should be distributed through a massive share buyback program. The company also manufactures and sells the premier electronic devices of the day, with iPhone and iPad being household words in America and other thriving nations.

What Does The Future Hold?

Will Apple make a comeback to its glory days in the $700 price range? I think so, although I look for it to be somewhere in the fall of next year. I believe the iPhone 6 launch and possibility of an iWatch launch could be the catalysts to push the stock back to its stellar heights. In the meantime, buying shares of Apple Inc. (NASDAQ:AAPL) seems to be a great way to squeeze some juice from the sometimes bitter market.

Disclosure: Author holds no position in any stock mentioned at the time of this writing.
Posted by IMPACT Ministries 360 at 1:14 PM No comments: