Apple Inc. (AAPL) May Get A Boost From iPad 5 In March 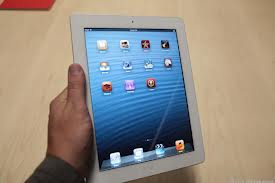 Apple Inc. (AAPL) has been on one heck of a roller coaster ride this year. Their stock has skyrocketed in price, then subsequently plummeted back down to $515 per share. However, analysts continue to hold their faith in the tech company, and their hopes may not be entirely unfounded.

The release of the iPhone 5 this Fall sent consumers scurrying for the new device. Then, the iPad 4 and iPad Mini were released and consumers once again rushed the markets to obtain the tablets. It seems now that there may be even more reason for excitement when it comes to Apple, both for consumers and investors.

According to 9to5Mac, Apple will be releasing the iPad 5 in March of 2013, and it will have many of the desirable elements of the iPad Mini incorporated into its design. This device will feature a slim and light design, along with a 9.7 inch display.

Along with the iPad 5, Fox News reports that we can expect a second generation of the iPad Mini as well.

With all the new products Apple is releasing, consumers are guaranteed not to find themselves bored with their current tablets. The high end tablet and smart phone market is one niche that Apple seems to have covered with perfection.

More details can be found at these links:
Fox News
9to5Mac