Nvidia CEO Calls Android The Gaming Platform Of The Future: iOS Out In The Cold 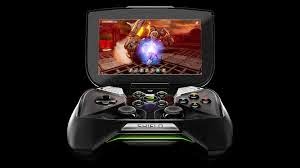 Nvidia CEO and co-founder Jen-Hsun Huang recently told investors that Android is the next big thing in gaming, according to a report by ZDNet. Nvidia is the manufacturer of the Shield, which essentially is an Android based gaming tablet. Huang reinforced the belief that the Shield will be essential in growing the online gaming community through Android OS.
Huang told investors that the, “Shield is our initiative to cultivate the gaming marketplace for Android. We believe that Android is going to be a very important platform for gaming in the future, and to do so we have to create devices that enable great gaming to happen on Android.

A Look At The Shield
The Nvidia Shield is basically an Android tablet that has been meshed with a gaming controller. This gives Nvidia the power to go head to head with other mobile gamin consoles, such as those offered by Nintendo and Sony. The Shield was released earlier this year, and thanks to recent updates it now has the ability to send its gaming experience to the big screen. With the power to send its video and sound to both monitors and TVs, it is a viable option for gaming in the living room as well as on the go.

Android Is Booming
Developers have already begun to realize the value in the Android platform and new apps are being offered daily. Because of the rush to Android by app and game developers, there is a huge opportunity for companies like Nvidia to develop consoles aimed specifically at Android based games.
With consoles like the Shield, Android could prove to be a huge cash cow for Nividia. As gamers discover the tiny gaming computer and developers continue to offer the top games as Android apps, the money will keep flowing in.

What This Means For Google Inc.
Android OS is the baby of Google Inc., and anything that is good for Android is good for Google. As developers offer apps on Android and they’re snapped up by consumers, Google is raking in a pile of cash as well.
Not only is the cash flow good for Google, but the boom in Android’s popularity is also helping Google dominate the mobile OS world. This means that Apple’s iOS will not have the user base that Android has. Android phones and tablets are manufactured by many companies, including Samsung, Nokia, and HTC, while iOS devices come only from Apple. While this may be a nice source of revenue for the Cupertino company, it limits the audience to just Apple customers.


As Android grows, the gaming apps continue to be added and purchased. This means the community will be open to the idea of new gaming tablets for the OS and the Shield just might be the next big thing in mobile gaming.

What do you think? Will Android continue to dominate iOS in the global market, or will Apple find a way to make it relevant to non-Apple products?
Posted by IMPACT Ministries 360 at 9:07 AM No comments: