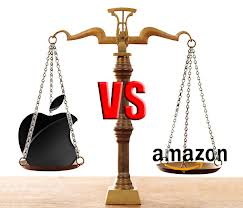 There is a war over words going on between Apple and Amazon regarding the term ‘app store.’ Apple coined the term in 2008 when it started its App Store and has filed an infringement suit against Amazon for using it. Amazon claims that the term is generic and therefore Apple cannot claim exclusive rights to it.


It seems that the legal system is tired of all the quarreling. District Judge Phyllis Hamilton in Oakland, California has already dismissed Apple’s claim that the Amazon Appstore was falsely presenting itself as an app store for iOS apps. She is persuaded that no one is confusing Amazon’s Appstore with Apple’s App Store.

Meanwhile, San Francisco US Magistrate Judge Elizabeth Laporte has ordered the two tech giants to sit down together and try to work out a settlement for this new difference of opinion. If the clash is not settled by these talks, then in August Judge Hamilton will be given the opportunity to rule in this dispute as well. Apple first filed suit in 2011 and the battle has been going on for almost two years now. How likely is it that when they meet on March 21 that they will be able to come to terms?


Apple is wary and protective of the App Store because of its popularity. It has garnered more than 40 billion downloads and most of those transpired in 2012. Despite that, Apple is not doing very well right now.  Its stock price has been on a wild roller coaster ride over the last 12 months and there is wide speculation in the market that Apple is losing its edge. Is that because it is losing it's creative initiative or because other tech companies are taking 'tiny bites' out of it for their own sustenance?

Amazon's latest coup in this war came rather quietly as the Washington Post reports a new service that is aimed directly at cutting slices out of Apple's market. The Post reports that Amazon launched a new music service this week that is designed specifically for Safari and iOS users. This service allows Apple users to download music without the use of iTunes for the first time. This is sure to garner a following, as many users have complained about the somewhat high prices on iTunes in the past.

The price of Apple Inc. (AAPL) shares has plunged from its lifetime high of $705 per share, and is currently trading at $499.38. This plunge seems to be exactly the opposite of what everyone thought would happen when the stock began surging last summer.

Get more news and Hot Offers from www.TinyAppleBytes.com!
Get more out of your iPad with this AWESOME video! Click Here!
Posted by Unknown at 10:03 AM No comments: