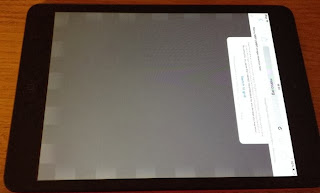 The first hint that this could be an issue in the iPad Mini model came last week, when rumors began making the rounds that Sharp’s IGZO panels suffered from burn-in, the condition that causes image retention. The rumors said that this problem was part of the holdup in production on the iPad Mini with Retina Display, and could also be a main contributor to the fact that the device was quietly released online without much fanfare.

Which Devices Are Affected?
The number of devices that are affected by this issue is still not known, but several iPad Mini owners on Twitter have used the grid test and determined that their devices do indeed have the problem. It’s also unclear as to whether this problem stems from specific display suppliers like Sharp, or if it runs across each of the suppliers screens. The reason for this is that not every one of the tablets has the problem, and devices from the same manufacturer often function perfectly, while others may experience the problem to some degree.

Apple Has Seen This Before
Image retention in products with the Retina Display screens has been a problem for Apple Inc. since the original Retina MacBook Pro displays were afflicted with the problem. The MacBook Pro issues were severe, with pieces of images from previously viewed screens hanging on into other screens for several minutes. One important thing to know about image retention is that it is not permanent, like the burn-in often seen on plasma displays.

Most of the time, the image retention problem is not noticeable, and is not necessarily a cause for alarm. However, if your iPad Mini with Retina Display does have the issue, you can return it for another unit, as you’re still in the window to exchange it.
Posted by IMPACT Ministries 360 at 2:56 PM No comments: 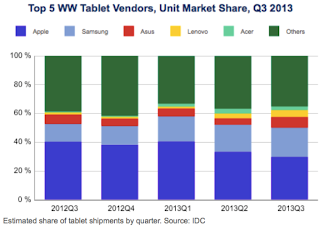 For the first time ever, Android tablet sales’ total revenue has surpassed that of the Apple iPad. According to a report from IDC, Google may finally have a leg up on Apple in the tablet market.

She wrote a memo to clients on Friday that said, “For the first time, Android devices accounted for a greater share of the market in revenue terms than iOS. Android revenue share reached 46.2 percent in 3Q13, for the first time exceeding iPad share of 45.6 percent. Android’s unit share grew to 66.7 percent from 58.5 percent a year ago, largely driven by Samsung and Lenovo, while iPad share declined to 29.7 percent from 40.2 percent…”

Google Delight Most Likely To Be Short Lived

Both Huberty and IDC note that this rise to the top for Android is most likely not going to be a long term trend. Now that the iPad Air and iPad Mini with Retina Display are on the market, IDC says there will be “robust shipment growth” this quarter.


The holidays are just around the corner, and both Apple and its competitors are gearing up for a huge sales season. With many of the stores that sell both iPads and Android based tablets, like the Google Nexus, opening on Thanksgiving Day, it will be interesting to see if Google can maintain its current foothold in the market. Judging from past performance, I feel it is safe to say that iPad will once again reign supreme when the figures come in next quarter.
Posted by IMPACT Ministries 360 at 11:01 AM No comments: 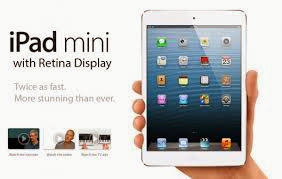 The iPad Mini with Retina Display is finally here, and not a moment too soon. Here's what the top reviewers have to say about the amazing little tablet that could jump-start Apple's holiday sales.

PCMag.com - "Beautifully built...an absolute pleasure to use."
CNET - "Powerhouse...top end tablet...editor's choice."
The Verge - "The one you really wanted."
Apple Insider - "It's an impressive technical achievement."
Engadget - "As good as the Air, just smaller."
MacWorld - "The iPad Mini Apple wishes it could have made in 2012."

Let us know what you think of the new iPad Mini with Retina Display. Does it live up to your expectations?

The Mother Ship Has Landed: Check Out This Video Of Apple's New Campus

Steve Jobs' Dream Campus
Apple Campus 2 will run on 100 percent renewable energy, be designed to boost interaction between employees, and will cost $5 billion.
Posted by IMPACT Ministries 360 at 9:05 AM No comments:

Apple VS Samsung: iPhone Was “Bet The Company Product”

Apple and Samsung are sworn enemies in the smartphone market. This is no secret and neither of the two tech giants make any attempt to disguise the fact. However, it seems that Apple is doing its dead level best to wring every single cent it can from patent infringement settlements with Samsung. While many people may wonder why this is the case, Phil Schiller gave the answer during testimonies at the patent trial this week.

iPhone Was A Risky Bet
According to Phil Schiller, Apple’s marketing chief, the iPhone was a major risk to Apple when the company decided to release it. In fact, he labeled it as a “bet-the-company” product, indicating that if the iPhone had failed, Apple might not be where it is today.
According to CNet, Schiller told the jury that Apple took “huge risks” in making the iPhone. These risks were tied to the fact that Appl was “starting to do well again in iPod.” It would have made more sense to focus on devices that Apple already knew would sell, but then, that was not Apple’s way.
The risks increased because Apple was “going to invest…resources, financial as well as people, in creating this product.” The product was the iPhone, and it was wildly successful, as we all know. The bet was risky, but it definitely paid off in a big way for the Cupertino company.

Apple Cashes In
It is very easy to forget that Apple, although innovative, has not always been the world dominator that it is now. In fact, all through 2006, the company’s stock was trading at less than $100 per share. However, once the iPhone really began to capture attention, the stock skyrocketed, boosting Apple Inc. (NASDAQ:AAPL) to its current position. The stock has since traded at above $700 per share, and is currently trading at $526 and some change.


If you look at all of Apple’s products, the iPhone is its big money maker. Consumer demand for each new release is still high, and the revenue stream from it is larger than any other products, including iPod, iPad, and Mac computers. It’s no wonder that Apple is strenuously defending the patents surrounding the iPhone and requesting that the courts award the highest settlement possible. After all, Samsung is endangering Apple’s bread and butter.
Posted by IMPACT Ministries 360 at 8:10 AM No comments:

Carl Icahn, the activist investor that almost every CEO dreads to see in the list of company shareholders, is ready to play hardball with Tim Cook and Apple Inc. Icahn has been pushing for a $150 billion share buyback program that Cook has been putting off. Now, Icahn has revealed that he is holding 3.9 million shares of Apple Inc. (NASDAQ:AAPL) and he’s ready to put the squeeze on.

Icahn’s position in Apple was disclosed to be holdings valued at $2 billion, according to documents filed on Thursday. However, it is expected that his actual holdings will be larger than what was disclosed in the Securities and Exchange filings.

Icahn Pressures Tim Cook
Apple Inc. CEO Tim Cook received a letter from Carl Icahn last month, requesting that the board boost the stock buyback plan. At the time of the letter, Icahn noted he had increased his holdings to 4.9 million shares. He claims the stock is undervalued, which is what is fueling his aggressive purchases.

The stock buyback plan that Icahn is pressing for is a large increase over the current plan to give out $100 billion in buybacks and dividends. However, Icahn says investors need to see that Apple is willing to give back to those who invest in the company. He feels that Apple is too focused on building its already massive cash reserve, which could be better put to use in re-purchasing shares of the company.

Tell Us What You Think
Should Icahn be pressuring Apple Inc. to boost the buyback program, or is Tim Cook on the right path in building a cash pile for Apple’s coffers? Let us know in the comments below.