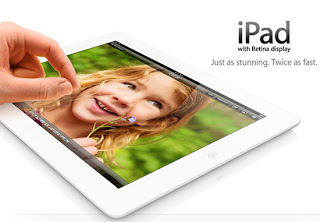 Apple Inc. (AAPL) has confirmed the existence of an even more powerful iPad 4. The new model will feature Retina display that measures 9.7 inches, a FaceTime camera, built in applications and many other features. With 128 GB of storage, this is the largest iPad yet, and it's comparable in features to Microsoft's latest Surface Tab.

Apple announced on Tuesday that the new iPad will be available on Friday, February 5th and the pricing guidelines indicate that it does closely compare with Microsoft's product. The iPad 4 will retail $800 for the wi-fi only model and $929 for the model that supports both wi-fi and cellular service. The new Surface Tab will retail for $899 for the 64 GB model and $999 for the 128 GB edition. The new Surface comes with Windows 8 and other upgraded features.

While it is surprising that the Apple product is the cheaper of the two in relationship to the Microsoft's 128 GB Surface tablet, ValueWalk reports that it may not be the more appealing device to individual consumers. According to Anna Peel, of ValueWalk's tech team, Apple is better off targeting businesses with this new product.

Apple has spent a lot of advertising dollars in attempts to draw businesses and organizations into purchasing their products, and it appears to be working. In a recent report, Apple claimed that almost every Fortune 500 company and more than 85% of Global 500 companies utilized the iPad in business matters on a daily basis. Microsoft is not going to lose this part of the market without a fight, and the new Surface is designed to work around the Microsoft Office suite, which makes it very attractive to companies who currently use Windows software to power their computers.

Apple needs this product to sell. The company has been suffering at the hands of short sellers and analysts of late. The stock has dropped in recent weeks, and only in the last few days has it started to come back. Currently it is trading at $457.90, which is still far below the price targets set in the middle of last Fall by Gene Munster and other analysts. Perhaps this iPad 4 could be the turning point that brings the company back to the position of most valuable company in the world.
Posted by IMPACT Ministries 360 at 9:45 AM No comments: