Well, Apple has finally made its acquisition of PrimeSense, the Israeli company that builds 3D vision sensors for machines like the X-Box Kinect. According to reports, the company was purchased for a price in the neighborhood of $360 million.

Krisitn Huguet, an Apple spokeswoman, confirmed the deal, but did not divulge what Apple plans to do with its new acquisition. She said, “Apple buys smaller technology companies from time to time, and we generally do not discuss our purpose or plans.” This answer is altogether typical of Apple Inc., as Tim Cook never likes to tip his hand in the middle of the game.

Apple could utilize the technology from PrimeSense in many different ways, as the company has moved away from its original sensor program that built large pieces, similar to the one in Kinect. The company’s new line of sensors, like the Capri, would work well for mobile devices.

PrimeSense is the perfect acquisition for the Cupertino company, as it will give Apple a direct line on motion sensitive sensors for its new products, which could include an Apple TV and an iWatch. I guess we will have to wait and see what the tech giant does with its new toy, although it’s highly likely that Tim Cook would like to find a way to use it to boot Samsung from the market for good.
Posted by IMPACT Ministries 360 at 4:39 PM No comments: 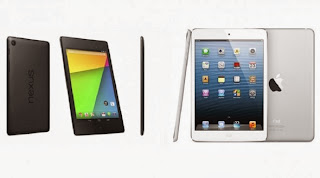 The holiday season promises to be a busy one for companies in the tech sector. Each year, the hottest item on many people’s wish list is a tech gadget, such as the latest smartphone or computer. This year, two of the most desirable items in the mobile sector are the Apple iPad Mini with Retina Display and Google’s Nexus 7 tablet.
Both of these tablets have a lot to offer, and while the iPad Mini is definitely receiving a lot of hype, the Nexus 7 is nothing to sneeze at when comparing the two.

iPad Mini with Retina Display
This tablet, which is the second generation iPad Mini, sports a 7.9 inch screen with Apple’s super clear Retina Display.  The tiny screen contains more than 3.1 million pixels, allowing for crystal clear image and video display. This number is more than 1 million pixels higher than the amount found in a high definition TV.
The iPad Mini with Retina Display is priced at eight different price points. The Wi-Fi only models start at $399 for the 16GB and increase $100 in price for each step up in memory size. The internal memory packages available are 16GB, 32GB, 64GB, and 128GB. For the Wi-Fi plus cellular models, the price points start at $529 and increase in $100 increments to $829 for the 128 GB model.

Google Nexus 7
Google’s revamped Nexus tablet is in its 7th generation, and the new model is quite attractive. It comes with a 7 inch display that delivers high quality HD video and images. The Nexus 7 is available in 16GB and 32GB models, and comes with 1GB RAM. It also sports an NVIDIA Tegra 3 quad-core processor.
The Nexus 7 runs on Android Jellybean 4.2, has a built in GPS tracker, and a 1.2 megapixel forward facing camera. This powerful little tablet can connect via WiFi, Bluetooth, and NFC (Android Beam) to other devices. It can also connect to the World Wide Web via WiFi and a data connection through a cellular provider.
The 16GB model of the Nexus 7, which connects only via WiFi to the Internet, is priced at just $229. The 32GB model that is WiFi only is just a $40 jump up to $269. The 32GB WiFi, LTE, and HSPA capable model is priced at just $349.

Pricing May Be The Key To Big Holiday Numbers
With Google offering its Nexus 7 tablet at a much more affordable price point that the iPad Mini, Apple will find some stiff competition this year. Many people will be opting for the money saving purchase of the Nexus 7 over the more premium features of the iPad. However, there will be the faithful following that Apple has created which will purchase the iPad Mini with Retina Display, simply because it is an iPad.

What will you be purchasing this year for Christmas? Tell us in the comments below.
Posted by IMPACT Ministries 360 at 7:57 AM No comments: